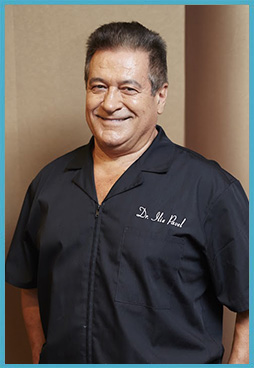 Dr. Pavel is originally from Romania, where he graduated from medical school in Cluj-Napoca, a picturesque old Transylvanian city. After graduation he worked as an internist for a short time in Sinaia, Romania and 1986 he moved to America to advance his education.

He received his degree as a Doctor of Dental Surgery from Loyola University of Chicago. Upon achieving his degree, he also worked as a teaching assistant in the histology department. Dr. Pavel is a Board Certified General Dentist and a member of the American Dental Association, Illinois State Dental Society, and Chicago Dental Society.

As an active member of organized dentistry, he was President of the North Side Branch in 2003-2004,  also he served as Director of North Side Branch of Chicago Dental Society  from 2013-2015 and is always proud to volunteer every year for the Chicago Midwinter Meeting- one of the top dental meeting in the world. Along with dentistry, one of Dr. Pavel passions is making wine.

He is an active member of The American Wine Society, and has received several prize medals over the years from international amateur wine competitions. Dr Pavel and his wife Cristina reside in Skokie.

"Dr. Pavel is very welcoming and did not keep me waiting whatsoever. We had a lengthy conversation about a treatment plan and I strongly feel he actually cares about the ...